It was an emotional day today….

Today I picked out my mum’s coffin.

It was so surreal.  And heart wrenching.

Sitting with the Funeral Director – talking about her life, picking out her flowers, discussing what we would dress her in.

10 days ago life was “normal”.  The world had not yet tilted on it’s axis.  10 days ago and I would never in my worst nightmares have thought we were preparing to bury my Mum.  That I would be discussing what I would wear to her funeral.  That I would visit my parents apartment, and she would not be there.

That was hard.  Her spirit was so strong there.  And it was like she was still around.  I only lasted about 10 seconds before I burst into tears.  And then I walked into their bedroom – to help my Dad get dressed – and I saw their bed.

He had tried hard to make it himself.  But it looked nothing like what Mum would have done.  Bless him.

And then I cried very hard.

And I looked at the coffin’s at the funeral home and it was a physical pain.  To imagine my Mum in one of them.

To accept – sort of – that my Mum is never coming back.

My Dad is broken-hearted.  50 years together, and his soul mate is gone.

In my entire life I never ever saw them have a cross word.  Never.  They were one of those married couples that I always aspired to be.  And as their child grossed me out lol.  So many times Mum would be washing the dishes and Dad would come up behind her to smooch her.  Even in later years (just before I left home at 22) they were still doing it.

Dad is trying to cope.  He proudly told me how he ironed his own pants this morning (the first time in his life he has ever used an iron).  He was talking about washing the towels in the next few days.  He was discussing buying himself some groceries.

More so when he told us he’d decided Mum’s funeral song… “Have I told you lately” by Van Morrison.

And he couldn’t even get the song title out before he dissolved into heart-wrenching sobs.

I’m not sure my heart will ever be in one piece again.

I miss you Mum. 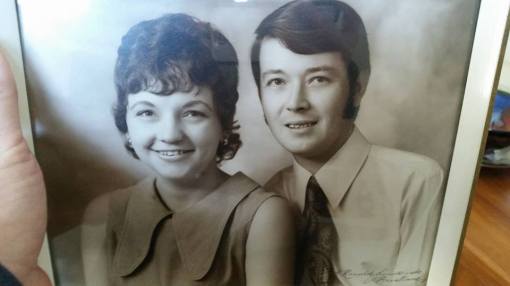 A page created to help spread love and kindness and positivity. Dedicated to making this world a better place, and making a difference in people's lives.
View all posts by istopforsuffering →